Dirk Van Dyck (Zandhoven, BE) outstanding with the hens in the middle distance

Dirk Van Dyck needs no introduction. The pigeon fancier from Zandhoven became world famous in the 1990s thanks to the one and only Kannibaal. And breeding birds Rambo and Den Bourges have become well known names as well. 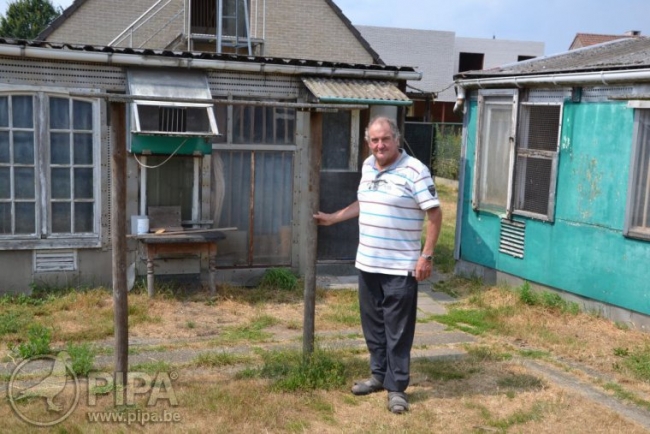 Dirk in front of the old lofts. The loft where Kannibaal lived has been demolished. You can see the hens lofts on the right.

His almost iconic status as in pigeon racing did not change Dirk as a person, all of his friends and acquaintances will agree on that. “My only regret is that I am not really good with languages”, Dirk suddenly brings up during our interview. “I can do many things with my hands but if a fancier from abroad visits the loft, I regret not being able to express myself in other languages other than in Dutch”, Dirk says.

Dirk is a fluent talker in his mother tongue indeed. This was supposed to be a brief interview for our PIPA report but it quickly turned into an in-depth converstaion on pigeons, his health, the common pitfalls of our sport, and his family. “Family above all else”, he says, and we could not agree more.

The main reason for writing this report was Dirk’s overwhelming achievement in Melun on 23rd of June 2018. He won the following prizes in the main race from Union Antwerp in good weather and a northerly wind:

And here are the results of the yearlings:

Since the one year olds were doubled in the old birds’ category, we immediately noticed how few old birds Dirk had basketed. And here is why: “I have been racing with the hens for the past five years, and this explains why I have a relatively low number of old birds compared to the number of yearlings that are raced every week. I do have a team of 7 old hens that are raced in the nationals every two weeks”, Dirk explains.

“I had never expected to abandon the widower’s competition but Bart Geerinckx and Gaston Van de Wouwer insisted on making the change. Nowadays I have only one widower’s loft left, and these are raced in Quiévrain and Noyon”, Dirk says.

Dirk tried out a different approach with the hens this season. The hens in one loft breed in winter, and they are paired in mid-December. The hens from the second loft are paired only in early March. As a result, they had a fairly grown up youngster at the start of the middle distance season.

“But I cannot really tell the difference in the results. The hens from the two lofts are both doing really well. However, I noticed that the hens from the loft that bred in spring have dropped an additonal primary compared to the other loft.” Dirk goes on: “Racing hens is quite a lot easier. In fact, I wonder if our new loft for the racing cocks will ever be used at all.” … and the hens thare are kept in the old loft

Dirk had some health issues in 2017, which are mostly out of the way fortunately. “After a while I could hardly get anything done, I was out of breath very quickly. I consulted a pulmonologist, and the verdict was quite confronting: all my pigeons had to go! I immediately told him that this was out of the question. I was not getting rid of my pigeons for no one. I then visited a cardiologist, and fortunately he had a different take. In fact, he wanted me to keep my pigeons, and today I feel a lot better”, says Dirk.

This pigeon breed obviously consists mainly of descendants of Kannibaal and Bourges. The introduction of Di Caprio (the champion that he bought from Leo Heremans) was an instant success. His name can be found in numerous pedigrees of team Van Dyck, along with that of his son Olympic Niels. Other bloodlines were introduced in recent years as well, including pigeons of Gaston Van de Wouwer, Bart Geerinckx, and Willy Daniëls, and Dirk has had some great results with them as well.

Click here for the pedigree of Olympic Niels, a son of Di Caprio. Another star of today’s racing team is Blauwe Kannibaal Junior. He claimed a first provincial in two consecutive races:

He is related to the Kannibaal bloodline an impressive four times – click here for his full pedigree. The breeding loft gives the pigeons plenty of frech air. The racing lofts are located at the back. The racing lofts, on the other side of the breeding lofts.

Dirk had a fantastic 2017 season and he has been doing really well again in 2018. Click here for an overview of his best results of 2018 so far.

Dirk will always be fond of the sprint competition. Many fanciers who start racing in the (longer) middle distance tend to gradually lose their interest in the sprint. “I still enjoy it a lot. In fact, I still like the Tuesday evenings the most. It is during the basketing for the local sprint races that you run into people you haven’t seen in a while. It is great to catch up with them.” It happens often that Dirk is not even there to see the pigeons come home on Wednesday morning, because he is doing training flights with his pigeons away from home. “To me, the sprint competition is mostly about meeting people.”

Dirk Van Dyck is not only an internationally renowned fancier, he also has a warm personality and an infectious enthusiasm when it comes to pigeons. He likes to keep things simple in the loft. He has been racing since 1973, so we reckon he has seen everything over the years. “Times have changed, I remember the 1976 season being just as hot as now in 2018. After a while we hardly had any pigeons left to race with. Most fanciers ended up racing only from Quiévrain!”, Dirk remembers. He has continued to be rather careful with his pigeons over the years. We asked him about any possible future goals in pigeon racing, and he said: “I would like to be racing the longer middle distance a bit more often, but I’m afraid to be losing my best birds.”