Joël Verschoot’s Contador, an absolute star in the wake of Armando (video)

Contador was another bird that developed into an absolute champion in the lofts of Joël Verschoot from Ingelmunster, in the wake of Armando. After all, pigeons that win 4 national top 10 prizes in the long distance, like Contador did, are not all that common. 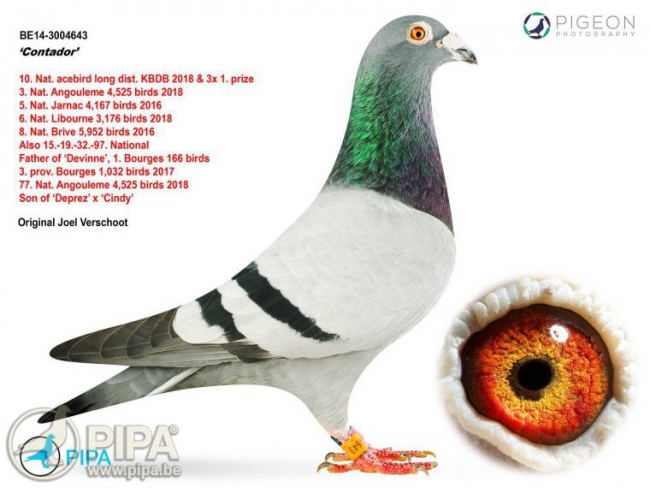 Joël’s old birds pretty much dominated the demanding 2018 race from Angoulême, claiming a 1st national with Armando, as well as a 3rd National with his other champion Contador. This top bird wins a 3-5-6-8th national, which makes for an impressive four national top 10 prizes. It is quite rare to come across two such talented racing birds in a single pigeon loft, and it is even more unusual for two such pigeons to be sold in a single online auction!

It is no surprise that Contador has been setting new auction records, just like Armando. The auction has yet to come to an end but Contador has already reached the top ten of most expensive pigeons ever sold in auction. We will have the final results on Sunday 17th of March, the closing day of the Joël Verschoot auction on PIPA, and the day when Contador changes ownership.

In the following movie – which was shot right before the auction – we see Joël Verschoot giving us a closer look at top class pigeon Contador. Meet this fantastic bird that has won quite a number of top prizes, often in the shadow of Armando. We cannot think of too many pigeons with such a fantastic palmares like Contador. Who will become the new owner of this magnificent bird next Sunday?